We only spent a week in Prague, but it was just enough time to see this fantastic city.

Arriving at Prague’s Ruzyne airport mid-afternoon on a hot June day in 2004, we were shuttled through the centre and out to our hotel. The hotel was situated about 2 miles North of the city, but with excellent bus and tube networks, it wasn’t hard to get around. The public transport system – although old – is superb and costs almost nothing to use. The colour inside the underground stations is indescribable.

Whilst we were there, the city were hosting an exhibition of cows. We (eventually) worked out that an artist had convinced companies to sponsor a cow and paint their on design on it. There must have been at least 300 of these plastic monuments dotted all over. The local authority moved them around at night when no one was looking – it was all a bit surreal…

One of the biggest attractions of Prague is of course the King Charles Bridge, or the Karluv Most. The bridge has famously linked the banks of the River Vltava for over 400 years, and has Baroque statues lining either side of it. The are many a story linked with the statues – one in particular was that if the candle the angel was holding ever blew out, the city would experience something gravely terrible, like a plague or something.

The bridge was rebuilt in 1357 after the original was swept away in a flood in 1342. The new bridge was designed by Peter Parler by commission of King Charles IV and legend has it that in order to strengthen the mortar, they mixed it in with eggs from nearby Velvry!

Wenceslas Square, a boulevard that cuts through the centre of the city, is the cultural, political and retail capital of the Czech Republic. Although probably not designed for mass demonstrations, the area has played host to protesters since 1848, and most memorably in November 1989 when 250,000 Czech’s managed to overthrow the Communist Guard.

Now though, Wenceslas Square is a tourist hot spot and a constant hive of activity. Lined on either side with hotels, shops, trading stands, (and oddly enough a C&A) and split down the middle by works of art, it is easy to see why people would want to come here.

The Narodni Museum dominates the top of the boulevard, followed by the Wenceslas Monument. The famous Hotel Europa is about halfway down, and the Bata shoe shop is near the bottom. Bata – one of the oldest shoe shops ever – is spread over 5 floors and is a place you do not want to take your girlfriend/wife if you intend to see daylight again!

On the West side of the River Vltava is Petrin. A steep wooded hill that leads up to a scaled-down version of the Eiffel Tower. Built in 1891 to commemorate the Prague Exhibition, it is obviously based on Paris’s own, but a lot smaller.

The Zizkov TV Tower, positioned in the poorer part of Prague in the East is often quoted as being the “most unpopular building in Prague”. At over 200m tall, it is certainly dominating and can be seen from just about anywhere in the city.

It was first designed in the 1970’s to jam West German television transmission, but wasn’t fully operationally until 1992 when it’s original purpose became obsolete.

Now, it just acts as Prague’s own television transmission and as a tourist sight. The crawling babies are courtesy of David Cerny, and are in my opinion pretty disturbing. Meant as a temporary art installation, the babies are now a permanent feature.

Prazsky Hrad, or Prague Castle is a fantastic group of buildings, situated on the West bank of the Vltava in the Mala Strana region. It is on a hill and is surrounded by the embassies of the nations.

A bit further up and behind Prazsky Hrad is Petrin and the mini Effiel Tower.

Contained within the complex is St Vitus’ Cathedral – another impressive feat of engineering and architecture. Also included in the boundary walls is Cerninsky Palace and the Castle Gardens.

There has been a castle on this spot since the ninth century, the most recent incarnation being built by Nicolo Pacassi and redecorated by Josip Plecnik in the 1920’s.

Mid-week, we decided to leave Prague behind and wander further into the country. With the Rough Guide firmly lodged in my hand, we ventured towards Karlstejn (pronounced Karlstein).

The small village hosts a fantastic castle and gardens and is an excellent area for walking. The town offered a couple of small museums, but we came here to get away from the hustle and bustle of Prague.

Staromestke Namesti – or Old Town Square – is the heart of Prague and the centre of the city, from where everything else can be navigable.

On one side is the Staromestska Radnice – the Town Hall, and also on this side is the famous Astronomical Clock. On the hour, every hour hordes of tourists gather outside to see the mechanical Apostles as they pass the window.

The Square is full of tourists at all times of day, but the dazzling architecture and awesome views from the top of the town hall are not to be missed and you soon forget about all the people below.

Prague is one of the most interesting places I have visited. Its history goes back centuries, but its people are friendly and modern. The architecture and ‘colour’ Prague provides is excellent and I would recommend to everyone they visit. 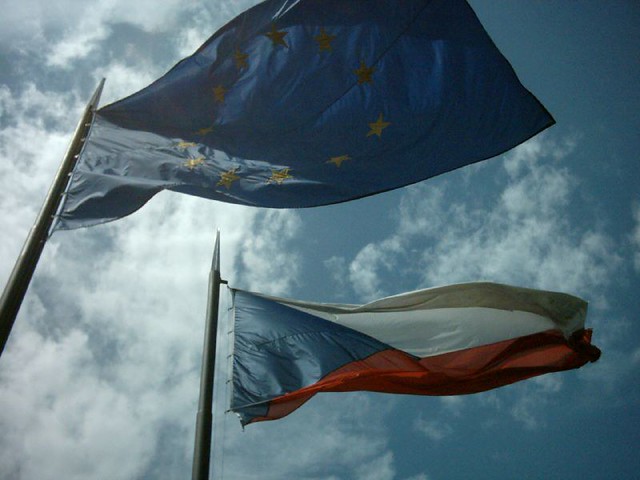